Apartment Shopping in my Mind

I live behind a bar.

There, I said it. Phew, what a load off my mind to finally be out about that.

Oh, wait . . . that’s not right. It was that queer thing I should be worried outing myself about. Good thing I didn’t mention that then, huh?

It’s a pretty respectable bar, as bars go: A sports pub actually, with tons of huge screens for people to drunkenly scream at for no apparent reason, as if the players can actually hear them–or each other for that matter, as loud as it gets over there. Recently renovated, pleasantly arranged, well-lit . .  it’s a friendly looking place in there, from what I can tell. If I actually drank or could fathom sports I might give you a better view of it than through its large shiny windows as I’m passing by each day. But I don’t, much, so there.

The pub is nestled on the ground floor of my comfortably appointed and friendly apartment building, with a lovely courtyard separating it from my cozy little apartment. I’m happy with the arrangement . . . for the most part . . .

You’d think I’d be happy that the noise abates around this time of night. But if you know me (i.e., you pay attention to the posting times of these blog entries. No, if you could actually see the posting times of these blog entries), you’d deduce that it’s not really a fly in my bearnaise sauce. You may not deduce the bearnaise sauce bit, actually. But if you did, I’d send you a cookie and a one-way plane ticket to Siberia, because frankly you’re freaking me out.

No, what happens around the wee hours of the morning are conversations. Drunken ones. Directly under my window.

I don’t mind conversations actually. The daytime ones are quite entertaining. I’ve witnessed a plethora of phone calls, debates, arguments, diagnoses, theories, educated and uneducated guesses, prophecies and neural pathway cleaning exercises (otherwise known as self-monologues) beneath my windows that have affected me anywhere along the spectrum of Boredom level 0.2, to Rolling under my desk laughing until my head pops off level 92.8. Although not entirely sane, at least they were relatively sober. 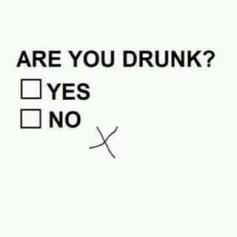 But at night it gets a little scary. It’s not the slurring or the exclamations about why my building keeps moving that I find so frightening . . .  but the way in which the monumentally drunk are stripped down to their bare essence. Their true colors. Their actual selves.

Most of the participants of these verbal expectorations are male, with a few rare drunk women mixed in to amp up the frighteningness (yes, I’m glaringly guilty of adding “ness” to almost any word, without the actual benefit of feeling guilty. about it . . . because I can). Not to kill your buzz here, but if I were to get a nickel for every misogynistic comment I’ve heard under my window past a certain hour, along with all kinds of premeditated rape-like details, I’d be able to afford installing huge neon lights on the moon that spell out, “Hey guys, WTF?” (I originally had “is wrong with you!” added to the end, but I calculated I’d need another 7 cents per misogynist.

I don’t really want to talk about it, but it looks like I did anyway. I mean someone has to. These guys’ male friends who DO have scruples might want to step up here. Just saying.

I’m kind of hoping this phenomenon is rarer than it seems, though I will clearly not be holding my breath on this point anytime soon. Perhaps it takes a mentality that thinks getting this drunk is actually fun, for that person to also be unclear on the whole human empathy thing. I don’t really know.

Until I find a cure for stupid, I’m thinking the best thing I can probably do is either: A) Learn to sleep like a “normal” person (Side-splitting laugh level 85.3), or B) find another apartment that exhibits a complete lack of bar-ness*.

Anyone know of a modest apartment I can rent in NW Portland?

6 responses to “Apartment Shopping in my Mind”